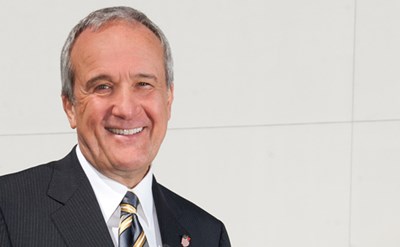 Mr. Ruvo is well known in the Las Vegas community for his ongoing support of charitable organizations, many of which are associated with education and children. UNLVino, another of Mr. Ruvo’s endeavors and one of the biggest wine tasting events in Nevada, donates all its proceeds to scholarship funds for College of Hotel Administration students.

In 1994, after the loss of his father, Lou Ruvo, to Alzheimer’s disease, Larry Ruvo made it his mission to make a positive change and hopefully cure the devastating diseases of Alzheimer’s, Parkinson’s, Huntington’s, MSA, multiple sclerosis and other neurodegenerative disorders. Mr. Ruvo worked toward establishing a cognitive disease center which resulted in his founding The Lou Ruvo Brain Institute. The institute is unique in its bold mission: to establish the international gold standard in the treatment of patients with dementia and Alzheimer’s and in supporting their caregivers. The founding of Keep Memory Alive and now its partnership with the esteemed Cleveland Clinic will forever change medical history in Nevada and around the world. The hundred-plus million dollar building designed by the internationally renowned architect Frank Gehry is home to Cleveland Clinic Lou Ruvo Center for Brain Health. The Lou Ruvo Center for Brain Health has become the world’s epicenter for research of these horrific diseases and has hosted numerous international symposiums and seminars, prepared numerous white papers and is making great strides toward finding cures for these brain diseases.